Dares, Bots, and Ports, oh my!

Last week I took part in Ludum Dare 35, and created a game in 48 hours using C and SDL2. I called it “VampShift: The Bloodening”, and following from the competition’s theme of “shape-shift”, you play as a vampire that has to progress through rooms via shape-shifting into a bat. 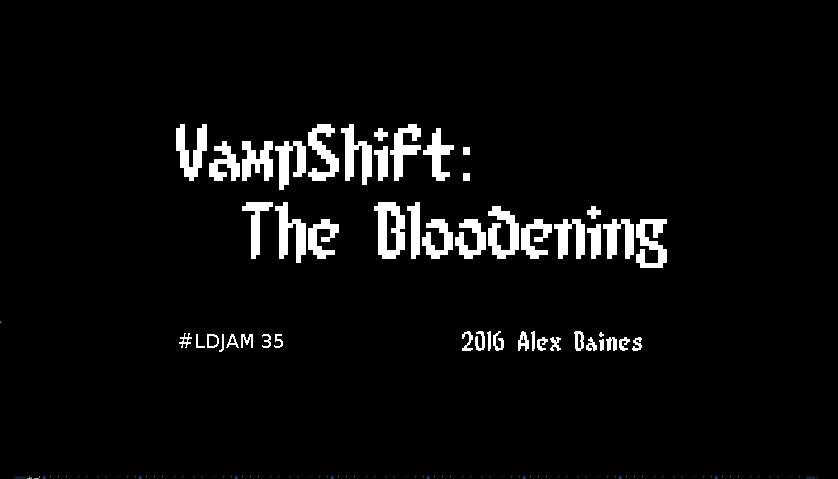 You can play the web version here, or see its Ludum Dare entry page here, which includes links to the downloadable version for Linux & Windows.

I also live-streamed the development of the game on Twitch. The VoDs are available at https://twitch.tv/insofaras/profile.

You might be curious about the “insofaras” user name there. I originally picked that (rather pretentious :/) name on twitch intending it to just be a random anonymous account, but lately I’ve been doing some projects under that name that I think are worth de-anonymizing it for.

The first of which is:

Insobot is an IRC bot written in C99 with a modular structure; it can load and reload modules in the form of shared libraries (.so) at runtime without disconnecting from the server. Various modules exist for it including, at the time of writing, modules for storing quotes, expanding URLs, showing twitch uptime / new followers, and giving the schedule for Handmade Hero.

The reason that last module exists is because Insobot basically spawned out of my involvement with the community around Handmade Hero (known as Handmade Dev or Handmade Network), and my interest in creating a project that uses a more limited subset of C++ than I was used to.

The community seems to appreciate insobot, and have used my insobot code as the basis for their hmd_bot, which is designed to replace their previous hmh_bot that was written in python. Perhaps the main reason insobot is “appreciated” though is due to one of its modules that I haven’t mentioned yet - the Markov chain module.

It’s a pretty standard Markov chain implementation that gets words — and connections between words — from the IRC chat. When mentioned, or on a random chance, it will form a sentence of its own and send that back for all to see.

For something that doesn’t really amount to much more than a lot of rand(), it has had some amusing results, several of which have been shared on twitter:

The source code of Insobot is avialable at github.com/insofaras/insobot. I’ll probably be moving it to my main github account at some point.

The second major project that I took on under the name Insofaras is helping to port the 4coder code editor to Linux.

4coder is a project by Allen Webster to create an improved editor for C and C++ programmers. He’s already implemented the standard text editor side of things, and is planning to add more advanced features that take advantage of the editor itself having an understanding of the programming languages in use.

One of its defining features is the customisation layer, implemented through loading a user-created DLL / shared-library. In contrast to the scripting languages often found in other editors, this approach allows extension of the editor with native compiled code, appropriate for its target audience of C programmers.

Mr Handmade Hero himself — Casey Muratori — has already found the current alpha build good enough to replace Emacs; he recently switched to using 4coder on his Twitch streams. That is, in the words of Allen Webster, awesome.

My involvement with 4coder has been mainly implementing the stubbed-out functions that were present in the Linux platform layer. This boils down to looking at how the windows side is doing things, and translating that into a POSIX and Linux approach.

I’ve enjoyed doing this Linux porting work, if you have a project that you would like a Linux version of, contact me: alex @ this site.